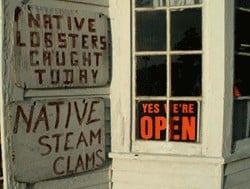 Clamshells had a sacred significance to Native Americans and were later used to make wampum-beads used for money. There are two basic families of East Coast clams-hard-shell and soft-shell. Hard-shell clams are also known by their Native name, quahog (pronounced co’hog). Hard-Shell clams are typically sold according to size, and the size determines the way it is most commonly used. Clams are harvested in a variety of ways, depending on specific habitat, and local law. Inshore, they are often harvested by hand tools, such as rakes, shovels, or tongs. Offshore, dredges are most commonly used.

Clams, which are high in protein and virtually fat-free, are perhaps the most versatile seafood in the world. They can be served baked, fried, stewed, stuffed, raw on the half shell, in chowders and soups, steamed… the uses are as infinite as the imagination.

Steamers: Also known as mud, long-neck clams, or in New England, “pisser clams” because they spray out of their long necks. Soft-Shell clams can’t completely close their shells because of a long rubbery neck (or siphon). Steamers have a thin brittle shell and come in a variety of sizes, from about ½ to 3 inches across. As the name suggests, this type of clam is usually steamed, but it can also be shucked and then sautéed or deep-fried.

How To Shuck A Clam

Did all this clam talk make you hungry?  Check out our selection of fresh Maine Steamer Clams” href=”https://lobsteranywhere.com/shop/maine-steamer-clams/” target=”_blank” rel=”noopener”>Maine Steamer Clams here!