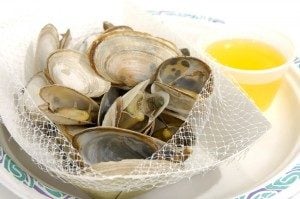 Maine clams, pisser clams, Ipswich clams, soft-shell clams and long neck clams are all known as the steamer clam in New England. Steamer clams run a close second to Maine lobster as the seafood of choice for both residents and visitors alike. Clammers dig steamers by hand using a clam rake in the mud and sand flats in places like Essex, Massachusetts, Harpswell, Maine or Chatham on Cape Cod.

Soft-shell clams are called steamers because they’re best served that way! Tender and extremely rich and sweet, these small clams are traditionally steamed and enjoyed dipped in drawn butter. Steamer clams have soft and brittle shells and do not completely close since the long neck or siphon gets in the way. The best clams for steaming are of course, steamers, but littleneck clams, or cherrystones can be substituted. Steamers are also used for New England’s famous fried clams. If you plan to make your own fried clams or chowder, your best bet is to buy them shucked in their natural juice.

There is nothing better than a heaping bowl of sweet steamer clams. In New England, steamers are served along with their steaming broth and melted butter; the broth to douse the steamed clam meat in and to rid it of any residual sand, and the warm butter for dipping. Eating steamers is messy, so have lots of bread fo soaking up broth, and paper napkins for your fingers.

Shells may open or gape naturally: this does not necessarily mean the product is spoiled or dead. The siphon or neck, of a soft-shell clam will constrict when touched. A gentle tap on the shell will usually cause the clam to close. If a clam does not respond to a tap on its shell, or if the shell is broken, it should be discarded. Plan to cook your steamers soon after they arrive. To store clams in the shell, refrigerate (34-45 F) in a shallow bowl and cover with a clean damp cloth.

How to Purge Steamer Clams
Since steamers are raked from sand and mud flats, you will find some sand. A brine soak helps clams rid themselves of sand and grit before they are cooked. Soak clams in a solution of 1/3 cup of salt in 1 gallon
of water (just to cover) for about an hour in the refrigerator. Some cooks suggest adding a tablespoon of cornmeal to the salt mixture.