Who invented whoopie pies? This much-loved dessert has caused dissension among its Eastern devotees.  The Farmer’s Almanac tells us that there are four states claiming the heritage of the whoopie pie: Massachusetts, Maine, New Hampshire, and Pennsylvania.  However, the real story unfolds with the battle between the states of Maine and Pennsylvania around 2007. 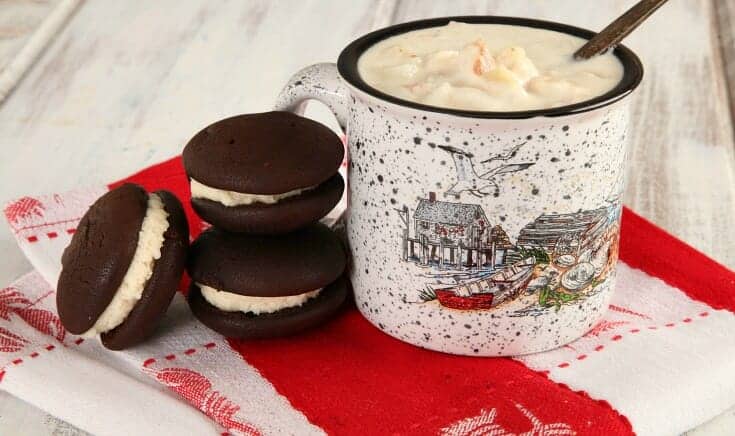 News travels fast: Interest sparked in who would win the controversy has been covered in all the popular media beats—The New York Times, Washington Post, NPR, The Wall Street Journal, USA Today—which doesn’t even begin to start the count of Google’s 136,000 pages on the subject.

So what is the buzz all about?  Well, many, many whoopies ago, the folks from Maine, Massachusetts, and Pennsylvania were staking claim that the whoopie pie originated in their state. The Pennsylvanians believed that the other states had no rights because the whoopies obviously were handed down through generations of Amish families.  One of the many versions of folklore is that the wives took the little bits of batter left over from their cake making and made the tiny pies.  The husbands and kids would find them in their lunchboxes the next day and would exclaim, “Whoopee!” when they saw the little bites of goodness.  Interestingly enough, the Food Timeline Web site, which has 2,300+ books, hundreds of 20th century food company brochures, and dozens of vintage magazines, states that there is no documented  proof that the whoopie pies originated in the Amish communities. 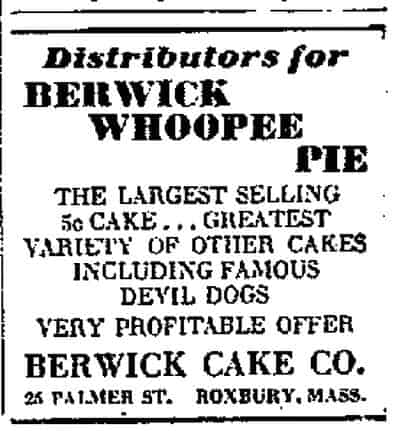 The Wall Street Journal provided this ad from 1931, which was included in Nancy Griffin’s book, Making Whoopies: The Official Whoopie Pie Book.  The ad was published in a Syracuse, N Y newspaper (Courtesy Ben ).

Maine’s claim was that Labadie’s Bakery invented them around 1925.  The original bakery burned with all the records, so there was no way to trace the information.  Undaunted, the good people of Maine established the whoopie pie as the official state treat in 2011.  A few years before the official treat declaration, in 2008, the Maine Whoopie Pie Festival was established by Center Theatre in the small town of Dover-Foxcroft—population 4,213.  The annual event is held, of course, on the official Whoopie Pie Day, June 25.  In 2015, the festival topped out with around 8,000 people enjoying the crafts, games, vendors, live music, and over 20,000 whoopie pies.  The whole town gets involved in the fun-filled day: the YMCA hosted fun runs for kids and adults; there was a farmer’s market down the street; the Dover-Foxcroft Congressional Church had a rummage sale; the local library held its book sale; Will’s Shop ‘n Save raffled off a 50-pound whoopie pie; and there were many more events to enjoy.

So, who won the controversial whoopie pie war—Maine or Pennsylvania?  Well, as Julia Child said, “People who love to eat are always the best people.”  And as long as you’re eating those wonderful little whoopies—who cares?

Whoopie Pies are the same thing as a Moon Pie

False. This Southern dessert might be considered a distant cousin, howerver, this treat is made with marshmallow filling and graham cracker cookies dipped in chocolate.

Whoopie Pies are the Official Dessert of Maine

False. Almost, it is actually the blueberry pie. In 2011 Whoopie pies were declared the official treat of Maine.

False. Marshmallow Fluff, that white gooey stuff,  was actually invented in 1920 right outside of Boston in Lynn, Massachusetts.

Pennsylvania holds the record for the biggest whoopie pie.

False. Although the people from PA built a whopper, weighing in at a 225-pounds, Maine crushed the record with a pie the size of a small space ship: It topped the scales at 1,067 pounds and a forklift was needed to assemble the chocolate cakes top and bottom.

True. Maybe not in New England area, but you might hear that term in Pennsylvania. The name may have been attributed to the similarities of gobs of coal or just simply two mounds of chocolate cake and frosting. Other terms for the whoopie pie include: “Big Fat Oreo” (BFO for short),  and some call them “black-and-whites.

The Best Whoopie Pies In the Land

Newburyport, Massachusetts based Chococoa Baking Company makes wicked good whoopie pies with a twist. These bite-size gourmet whoopies have been celebrated by Yankee Magazine and made Oprah’s O list.

This updated version is only 2” in diameter and  come in packages of three. It is three bites of richer tasting gourmet cake made with a a blend of three premium kinds of chocolate and fresh buttercream. The organic buttercream is a real difference maker.  It is creamy and not overly sugary. In some New England recipes you might find Marshmallow Fluff, or even a Crisco vegetable shortening filler. Theese whoopies are made with no preservatives or artificial ingredients.

Do you have a hankering for real good whoopie pies? LobsterAnywhere has teamed up with award-winning whoopie pie makers, Chococoa Baking Company to ship these specials treats to you.  Deliver some childhood memories to friends and family no matter their local. Make it a special lobster dinner with with fresh-caught Maine lobsters, clam chowder and all the fixings?

How to Make Whoopie Pies at Home

All traditional whoopie pies may look similar: two chocolate cakes with white filling between.  But the differences from pie to pie are astounding.  The best (namely, these) have cakes that are moist and soft rather than chewy and dry, and filling that’s true buttercream, like an airy whipped frosting.

In a large bowl, with a whisk beat together the butter, sugar, vanilla, and egg until light and fluffy.  Sift the flour, cocoa powder, baking soda, and salt into the bowl and mix together.  Add the buttermilk and stir until combined.

Using a level 2-inch ice cream scoop or heaping tablespoons, scoop the batter onto the prepared baking sheets in small rounds, leaving at least 3 inches of space between each one.  You should end up with 24 small cakes altogether.

Bake for 10 to 12 minutes, until the cakes are firm to the touch.  Transfer to a wire rack to cool.

Make the filling: Place the butter and vanilla in a large bowl and beat together with a wooden spoon until well combined (or cream together with an electric mixer on low speed).  Sift in the confectioner’s sugar.  Add the milk and beat together until light and fluffy.  Use immediately, or cover and store in the refrigerator until the cakes are ready.

Assemble the whoopie pies:  Take 2 cooled whoopie pie cakes of about the same size and set them flat-side up on your work surface.  Using a small ice cream scoop, place a scoop of the vanilla filling on one cake. Gently place the other cake on top, with the flat side against the filling, being careful not to press too hard or the filling will squeeze out.  Repeat until you run out of cakes or frosting.  The finished whoopie pies can be covered with plastic wrap and refrigerated for up to 3 days, but they’re best right away!