Fueled largely by China’s growing middle class, demand in the country has skyrocketed for one of the ocean’s most prized culinary delights. With more and more people wanting the world’s best lobsters, U.S. exports from Maine to the Asia have soared, with more than three dozen dealers from the coastal New England state now flying these crustaceans to Asia.

Some Chinese restaurants are reportedly now offering what they call “Boston” lobsters for as much $100 each, and the U.S. chain Red Lobster even launched its first restaurant in Shanghai in December 2018 to take advantage of the surge.

Unlike the casual setting in its homeland, however, the global brand has pushed for a more upscale atmosphere here, and it expects to open more locations in both mainland China and Hong Kong in the coming years.

And if recent trends are any indication, this is only the beginning.

Anyone who has visited a “wet market” in China knows that specialized seafood, including the live variety displayed for sale in tanks, is nothing new in this part of the world. Markets across almost every city, town and village in the country feature noisy trading floors packed with just about any creature imaginable. They are always bustling with commercial and personal buyers alike who are searching for everything under the sea.

But changing times mean changing palates — and recent years have given rise to China’s new found taste for lobster. In some ways, this is nothing news. Lobster has long been a popular dish here. Many people, however, have only known of the local warm-water variety, which closer resembles large prawns — a world away from their premium cold-water cousins.

Though the elite in China have certainly enjoyed the finer foods of the world for decades, the rising purchasing power of the average citizen is introducing more and more people to the large, deep-red, highly coveted breed of lobsters that can only be found off the coast of New England and the Maritime provinces of Canada. Chinese vendors and shoppers are big fans of seafood-especially lobster shipped from Maine and Canada.

And in a nation of 1.5 billion, the newfound appreciation for the pearly white flesh and superior flavor of these meaty sea dwellers — especially when dipped in melted butter — means big business. Lobster sales from North American to China have increased by 15% over the past 10 years, and U.S. sales of live lobsters to the country alone hit $128.5 million in 2017. And China has some serious economic muscle. Just ask the GAP. They had to apologize to China for printing t-shirts featuring an ‘incorrect’ map of the country.

With such demand, it seemed like nothing could stop the influx of lobsters to Chinese shores. Then came the trade war with the United States and a series of tariffs enacted by the administration of President Donald Trump to force officials in Beijing to the negotiating table.

The crustacean market was not spared. To highlight the fallout, a recent Bloomberg article used the example of a Maine-based company owned has in recent years shipped one out of every five lobsters it has handled to China. The distributor had built itself into a $50 million business in the past three decades and could get a live lobster from its facility to Beijing in two days.

That all changed when Washington put the 25% tariff on lobsters in July of 2018. Now, fisherman in Maine fear they have been priced out of this vital market, and their counterparts to the north are reaping the benefits. To make matters worse, Beijing made delivery barriers more difficult with additional import and custom regulations as way to retaliate against the US tariffs.

The trend was already on the rise for Canada. With the US deliveries to China grounded, Canadian companies are enjoying strong exports. Its industry saw a 50% jump in sales, up to 12 million kilograms, in 2018 over the prior year, according to the CBC. In financial terms, the country brought in more than $220 million in sales to China last year (from January through November) compared to just $27 million in 2011. In fact, Canada does not have enough planes to export its lobsters. There has also been a significant Chinese fisheries investment in Atlantic Canada from processing plants to lobster holding facilities. After the United States, China is now the second largest market for Canadian seafood.  In 2018 China imported $1.16 billion worth of Canadian seafood.

The tariffs are only pushing the pace even faster. By and large, Chinese consumers don’t see a difference in the country of origin — not to mention the fact that some Maine lobsters are reportedly being rerouted through Canadian distributors to sidestep a direct hit on price.

For anyone selling lobster in Canada, the Chinese market represents a booming opportunity.

The Year of the Lobster

Many North American retailers live and die with the Christmas season. Some even rely on the whims of holiday consumers for upwards of three-fourths of sales.

Across the Pacific Ocean, there is a much bigger version of this phenomenon for the Chinese New Year, the largest celebration of the year in the nation and a time when lobster orders explode. In 2020, the Chinese New Year officially begins on January 25th and lasts 15 days. The two weeks of festivities is a time when families get together and celebrate with foods that represent abundance and prosperity for the Lunar New Year.

While ham and turkey may be the seasonal specialty in the United States, seafood holds a prominent position on family tables from Beijing to Shanghai to rural villages. And the deep red that Maine lobsters turn when cooked makes them particularly popular during these festivities. A Maine red lobster resembles the red dragon in China; it’s a sign of good fortune and prosperity in China. Delivered from half way around the world, imported Maine lobster is considered a status symbol. To impress family and friends, the bigger lobster sizes are most sought after for the Chinese New Year feast.

During New Year celebrations, cities become a sea of red. Bright lanterns and banners can be seen everywhere. Traditionally, superstitious citizens give each other little red envelopes, called lai see, that hold cash. These are not just gifts but special charms that are intended to spread good luck in financial matters over the coming year. 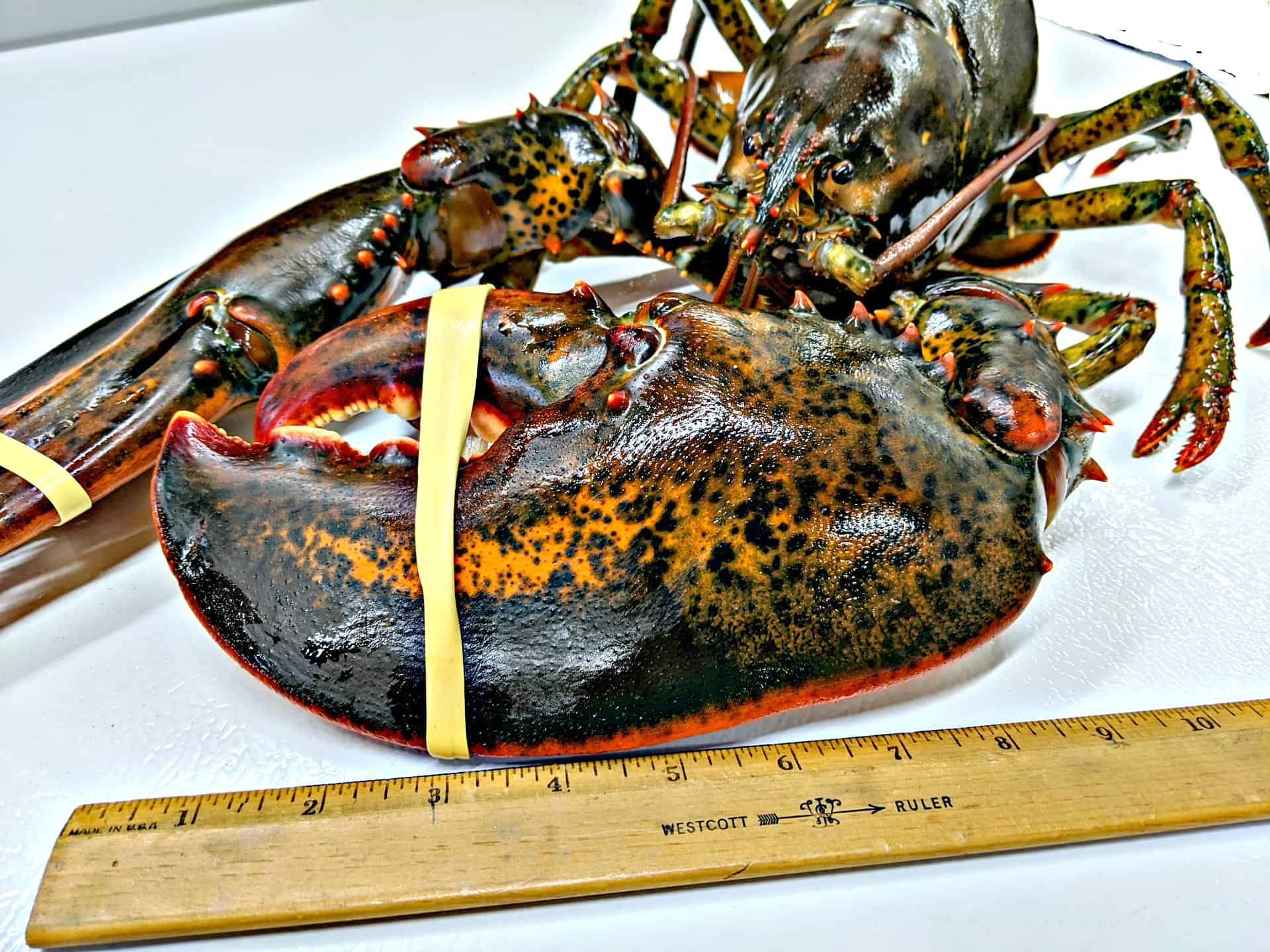 Given this obsession with lucky red, the crimson crustaceans has become the perfect meal for many people to usher in a happy, healthy, and wealthy new year.

The Chinese will celebrate their New Year on January 25. Despite the popularity of this new dish in the country, it will not actually kick off the Year of the Lobster — but the Year of the Rat.

Nevertheless, in the spirit of the upcoming festive season, and to honor China’s newfound love of Maine lobster, we thought we would present you with a little red packet of our own. And although ours does not contain any money, it does have a delicious recipe to help give your classic Maine lobster a Chinese twist.

We truly hope you enjoy your holiday meal — whatever is on the plate — and we leave you with wishes of “Kung Hei Fat Choy,” a happy and prosperous Chinese New Year!

Stir-Fried Lobster with Ginger and Scallions

The Chinese preparation method differs from the technique commonly used in New England, traditionally chopping the lobster into large pieces and stir frying it with the shell on. This protects the delicate meat from the intense heat of the wok, leaving it perfectly steamed inside.

Thinking about about ordering takeout on New Year holiday? Skip the crowd at your local Chinese restaurant and put in your order for lobsters direct from the source! Lobsteranywhere has the freshest seafood for ringing in the Lunar New Year!

What do fish represent to the Chinese?

Fish, especially the whole fish, means extra or surplus of money. In Chinese, “fish” (鱼 Yú /yoo/) sounds like ‘surplus’. It means an increase in prosperity or wealth. It is traditionally prepared whole to show family unity.

What is the meaning of shrimp in Chinese culture?

Shrimp represents liveliness, as well as happiness and good fortune. The Chinese word for the crustacean sounds like laughter.

What is the Lunar Year?

The Lunar New Year is a two week holiday celebration of family and feasting in China beginning on the new year on the traditional Chinese calendar (January 25, 2020 – February 11, 2021).

How much Much Maine lobster was imported to China?

In 2018 alone the US exported more than 17.6 million pounds of lobster to China according to National Oceanic and Atmospheric Administration.

What is the Year of the Rat?

The rat is the first of the zodiac animals of the repeating 12-year cycle of animals which appear in the Chinese zodiac . The 12 zodiac animals in order are as follows: Rat, Ox, Tiger, Rabbit, Dragon, Snake, Horse, Goat, Monkey, Rooster, Dog, and Pig.  People born on in the Year of the Rat sign are thought to be hardworking and clever. In 2021 it will be the Year of the Ox.

What Food is Popular on Chinese New Years?

Yes. With over 800 million online shoppers, China sells a ton of lobsters online! For example in 2007 one of China’s largest e-commerce platforms sold 140,000 live lobsters in one day alone! And during China’s Singles Day Shopping Festival (November 1-11) it sold 12 tons of live Canadian lobster.