Learn how to host a clambake party at home or on the beach! A classic Maine lobster bake prepared the old-fashioned way is steamed in seaweed and ocean water. Food writer, Craig Clairborne called the lobster bake “…the most colorful, joyous and festive of American feasts.” Lobster bakes are fun, memorable, and informal. It’s also a lot of work! 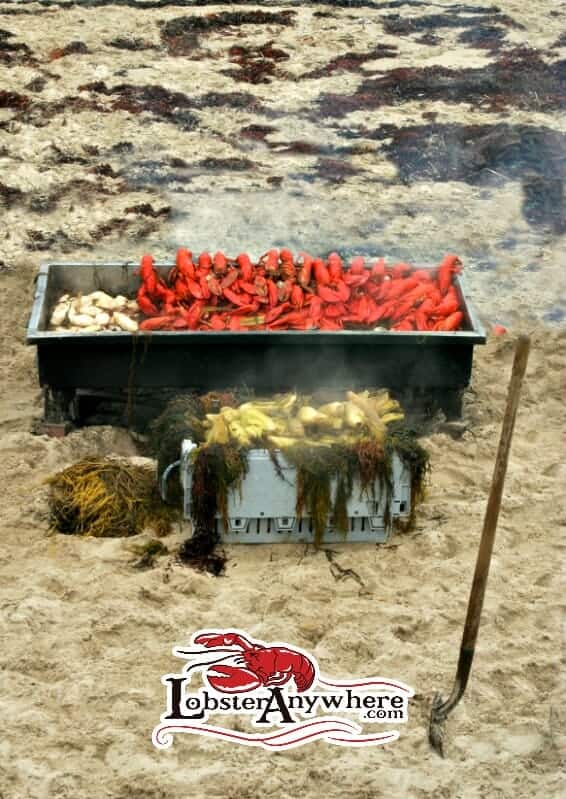 The tradition of the clambake goes way back to our Native Americans who taught the settlers the art of steaming fresh seafood on the shores of New England. The New England clambake is generally credited to the Wampanoag Indians, indigenous to Cape Cod, Massachusetts. The Wampanoag generally did not eat lobster, but used it as bait to catch local fish. Native oysters,  scallops, sea clams and locally cultivated corn and squash would all key ingredients to their clam bake.  A typical modern clambake  consists of lobster, clams, mussels, potatoes, and corn. Fish, sausage, chicken, are also commonly used by bakemasters.  Today this ancient cooking form is enjoyed wherever there is blue ocean, sandy beaches, and live Maine lobsters.

The art of preparing a traditional pit-dug clam bake is still practiced by a few local bakemasters. It takes a lot of hard work and patience since it’s  a day long affair. If you own your own beach, or there are no local restrictions for open fires you are in luck. Clam bakes have become popular culinary experience because they feature seafood lovers favorite entrée–Maine lobster.

The main ingredients for a traditional clam bake, besides live Maine lobsters, include: fresh clams or mussels, corn in the husks, new potatoes, onions, and even sausages (such as kielbasa or chorizo). For the clam bake you will also need fire wood, smooth rocks, rockweed seaweed, a canvas, tarp or potato sacks to trap the steam.

STEP 1: Walk the beach in the early morning with friends and gather up some fresh seaweed, drift wood to build your fire, and rocks to line the bottom of your pit.

STEP 2: Dig your pit and line the bottom with large rocks. Top your rocks with your drift wood.

STEP 3: Build a fire on top of the stones. Tend to your fire until the rocks become red hot.  Make sure the stones are hot enough to glow or at least spit back ocean water.

STEP 4: Rake off  as much ash off the rocks as possible, and pile a layer of seaweed on the rocks.

STEP 5: Layer the rocks with potatoes, corn, onion, clams, and live lobsters. Top with more seaweed and cover with a tarp or a potato sack drenched in seawater.

STEP 6: Bake your seafood for at least two hours. A good sign the food is cooked to perfection is to check the potatoes first. If they are soft, your clam bake is done.

Gather with friends and family and dig in. Serve your steamed seafood and bright red lobsters with melted butter and fresh lemon wedges. Don’t forget the lobster crackers and seafood forks.

No beaches near you? No problem.  You can have a mini bake in your backyard on the grill. No fire permits necessary and you don’t have to dig a hole and start a big wood fire. It is  faster and more convenient to heat up charcoal briquettes than rocks in the sand! Besides if your not a bakemaster, getting all your food cooked evenly on an open fire takes a lot of practice. You can bake a combination of lobsters, clams, ears of corn, and red potatoes.

First, soak some seaweed in a bucket of water. Next, wrap your fresh seafood in a cheese cloth with a layer of seaweed and a splash of water. Wrap this up tight in a packet of aluminum foil. Cook on the grill at medium heat for approximately 40 minutes with the cover closed. When your potatoes are soft, your lobster bake is done!

Some good choices for dessert include watermelon slices, strawberry shortcake or blueberry cobbler.