This guide will not teach you how to eat lobster per se, but show you some tools and a few tricks to make your lobster experience a little easier. The truth is there is nothing graceful about cracking into and eating lobster. Do you have the right lobster tools?

Eat Lobster with the Right Tools

No need to be intimidated with breaking down a cooked lobster. This is especially true if your boiling up soft-shell summer lobsters. With soft shells lobster you can get by with just your bare hands and a big roll of paper towels. But for real good, rock hard lobsters you might need some help.

Most likely you have seen the silly bibs and the shiny implements to extract the meat. But before you rush out to Williams-Sonoma and buy the latest and greatest seafood gadgets, check your kitchen drawers. Most of the equipment you may already have! Here is a list of lobster tools you can use along with instructions. 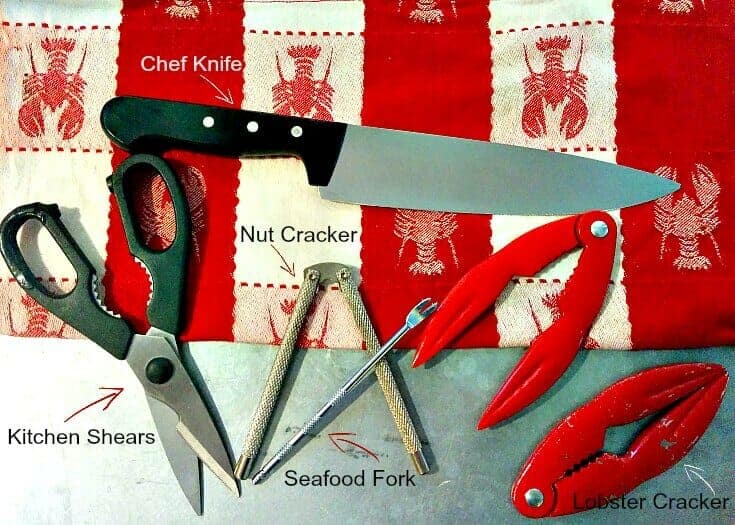 Do you really need a lobster pot, the kind specifically made to cook lobster? The  short answer is no. While a lobster pot makes a nice presentation, any soup, pasta or stockpot will fit the bill–so save your clams. What size pot is needed? If your only cooking a couple of lobsters you can get away with a 4 quart sauce pan. If your boiling lobsters you just want to make sure there is a enough room in the pot to completely cover the lobsters. Although not necessary, some pots have  a colander insert which comes in handy for steaming or simply draining the lobster. A large 19-20 quart stockpot will cook about six to -eight 1 1/4 pound lobsters at one time. Lobsters cook in less than 1o minutes so you can always cook them in small batches. Plus, you will need each batch of lobsters to cool before cracking and serving. 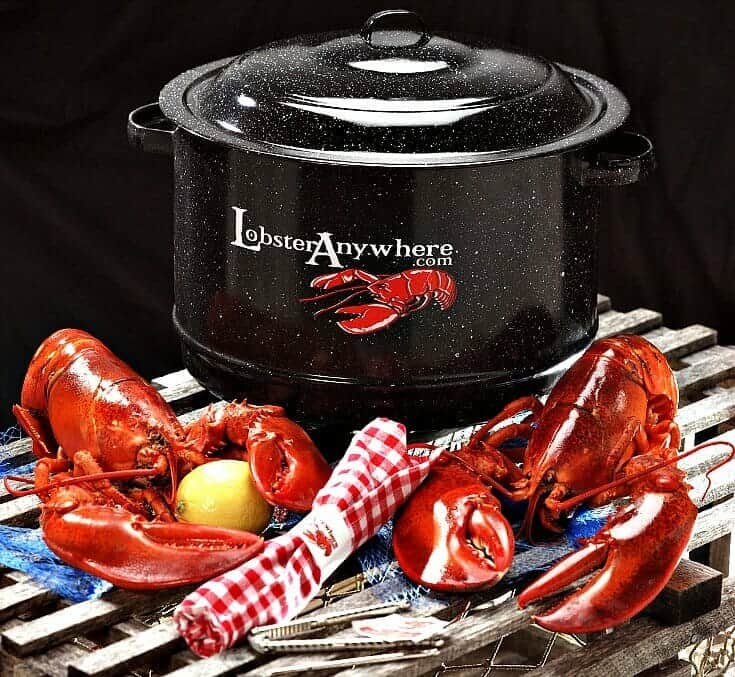 Removing cooked lobster out of the pot is not an easy as it seems. First, the lobsters will gain a little water weight making them cumbersome to lift up. Second, the lobster will be steaming hot. Use tongs to carefully clasp the lobster at the center of the body or carapace and pull them out of the pot. Hold over the pot to drain off any excess water. With your other hand, place a kitchen towel under the lobster’s body and transport to a large bowl or prep area.

After you have removed your lobsters with the tongs, place them in a large bowl and allow time to cool before handling. To stop the cooking process submerge lobsters in a bowl filled with cold water and ice cubes. Alternatively you can put lobsters in a colander in the sink and rinse with cold water.

One of the biggest messes in eating lobster is removing the tail from the body. Twist off the tail and allow the water to leak out over the bowl or a clean sink.  You can use a cooking pan to collect the juices (see below). The bowl can double as receptacle for the shells.

4. Cutting Board and Cooking Pan

To take apart your lobster you will want to lay it on a cutting board. You will find lobsters will have lots of salty water inside that drips and splatters everywhere. One trick is to sit your cutting board on top of a shallow pan to catch the juices.

Every kitchen has one and they come in handy for not only quickly killing the lobster, but also for cutting the tail and cracking open the claws.

To kill the lobster quickly, take the tip of the knife just behind the top of the head and drive the knife through. Alternatively, you can split the whole back side of the lobster going right through the tail. If your squeamish you can first numb the lobster by placing it in the freezer for a few minutes.

Place the tail on a cutting board with the membrane side down and use a chef’s knife and cut the tail in half lengthwise. Now you can easily pull out the meat or you can serve in the shell.

Another handy use for the chef knife is for cracking the lobster’s claw and knuckle. You will find the claws are a little thicker and harder than the tail shell. This is why the claws take longer to cook. Taking the back dull part of the knife simply give the claw a good whack on its edge. When the knife makes it into the claw give it a 90 degree twist to crack the shell. To avoid flying shells and juices cover the claw with a kitchen towel  Connected to the claw is the knuckle. Many believe the knuckle is the sweetest morsel of lobster meat. You can use your knife in the same manner. 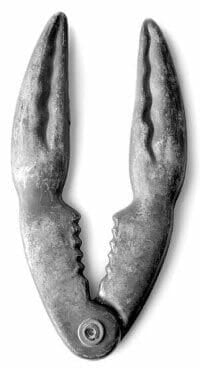 We bet you have some old fashion hinged nut crackers in your kitchen—the kind your grampa used to crack walnuts. These will work fine for cracking open the lobster’s claws or even the tail. As mentioned above, a chef’s knife will do the job just as well. You will find newfangled lobster crackers on the market. There is not much difference in how they work than the traditional nut crackers. And don’t forget your hands work pretty well cracking the lobster shell. Just be careful as some of the shell pieces can be sharp.

One of the most underrated tools in the kitchen are shears. Kitchen scissors are a good investment with its myriad of uses. First use them to clip the bands off the lobsters.

Shears are best for accessing the meat in the tail section of the lobster. With your shears cut under the membrane section of the tail shell and release the meat. (Again, you can simple use your hands  and squeeze the sides of the shell and push the meat out.) The shears can also be used to extract the meat out of the knuckle part or even the legs. If your making lobster rolls you can cut up the meat into good size chunks.

No you will not be using the rolling pin for dough to make lobster pizza! Use it to simply roll out the meat from the lobster’s legs. If you don’t have a rolling pin try a wine bottle. The leg meat can also be eaten by simply sucking out the meat like a straw.

Since cracking lobsters is a messy job be sure to have plenty of paper towels close by. Dish towels come in handy for moving a hot pot, lifting the lid and cleaning up. As mentioned above you can also use a towel to protect yourself from shell fragments and splashes when cracking, breaking and cutting the shell.

Finally, a set of cotton napkins will be more useful than any lobster bibs. In his book Lobster at Home, Boston seafood chef Jasper White points out, “bibs do little more than provide the lobster juices a funnel straight to your lap.”  A nice set of of gingham napkins will not only decorate the table, but protect your clothes from the lobster juices.

Get Cracking at your Lobster Party

Most lobster events are informal gatherings among friends and family, so making a mess is part of the fun. If your throwing a lobster bash you can place the lobster utensils in the center of the table to share.

With formal and celebratory events presentation is important. Right after the lobster comes out of the pot you can either pre-crack the lobsters or remove the meat altogether. This way your guests can enjoy lobster with minimal work and a little less mess. Dress up your the table with Chardonnay glasses and fancy gingham napkins; and save the plastic bibs for your fourth of July lobster bake.