This year bring back the New England tradition of lobster and fresh seafood on your table.

Today’s modern day Thanksgiving menu is very different. Historians tell us that Turkey was  not on the menu, rather it was wildfowl and venison (deer) and seafood. Fresh seafood consisted of mussels harvested from the rocks off the shores, and lobster, clams and oysters!

Those poor pilgrims. Cold and starving in a brave new world. Facing all kinds of peril in a foreign land. Thank goodness for their charitable new friends, the Wampanoag Indians, who saw fit to share their bounty with these newcomers. There was, indeed, much to be thankful for.

Alas, how fortunate that, a few miles away, just below the water’s surface, lay scores upon scores of noble lobster ready to provide a veritable feast!

Edward Winslow, a three time governor of Plymouth Bay Colonies, details the bounty of what would become Massachusetts:

Our bay is full of lobsters all the summer and affordeth variety of other fish; in September we can take a hogshead of eels in a night with small labor, and can dig them out of their beds all the winter. We have mussels… at our doors. Oysters we have none near, but we can have them brought by the Indians…

What would Thanksgiving Day be like today if, instead of turkey and stuffing, you served steamed lobster and…oh, I don’t know…fresh asparagus? Or perhaps some scalloped potatoes.

What a sight it would be for everyone to see the big, red, animated lobster waving it’s way down Broadway atop a slow-moving float during the Macy’s parade. At school pageants across the country, kids would vie for the coveted role, not of Tom Turkey, but of Lex Lobster. Each year, the president would officially pardon a specially selected live lobster on the White House lawn. 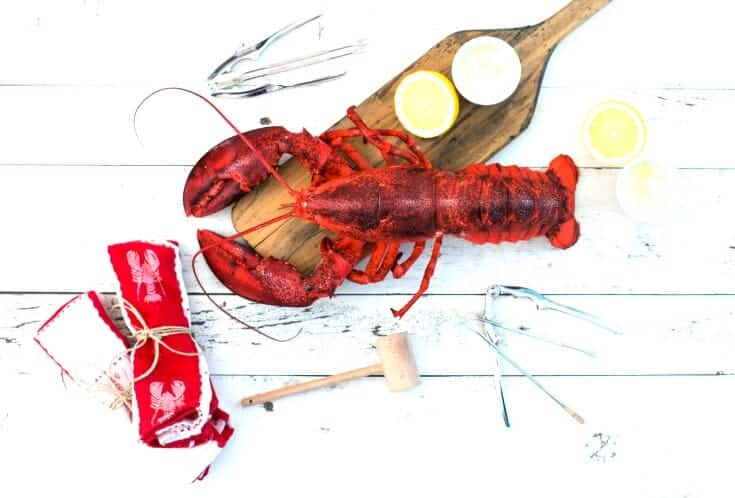 Bring together family and friends and crack into lobster. Make the meal memorable and delicious. Forget seven hours in the oven. The main course could be cooked in about the time it takes the casseroles to cool down after coming out of the oven. Later, everyone would gather around the table and dig in to a platter heavy with Lobster. Kids would fight over the claws instead of the drumsticks. A helping of coral, not cranberry sauce, would grace every plate. Oyster stuffing, and a nice warm mug of New England clam chowder. And, of course, we’d be eating lobster rolls made with the leftovers for the next week, instead of turkey sandwiches.

Wow…actually, that little flight of fantasy of mine sounds pretty good. I wonder if the family would revolt if I decided to give it a try? Would that be bucking tradition a little too much, or is the time right to start a brand new tradition? Maybe it’s just me, but as much as I look forward to Thanksgiving each year, I’d look forward to it that much more if it meant throwing out the diet to eat my weight in lobster instead of Turkey. And, best of all, no tryptophan lulling you to sleep when you’re watching the big games.

Maybe we’ll make it a movement. Lobster as the new official Holiday delight. Anybody in?

Get Stuffed with our super fresh seafood this Thanksgiving! Skip the turkey and pass the lobster!