The lobster tail is the sweetest part of the lobster and the biggest portion of meat, but you don’t have to go to a fancy restaurant to enjoy this delicacy.

Learn the best ways to cook lobster tails at home with this how-to guide for boiling, steaming, baking, and grilling frozen lobster tails.

Read on to discover:

And so much more! By the end, you’ll be able to go toe-to-toe with the best lobster chefs out there. Let’s dive in.

How to Thaw Frozen Lobster Tails

Pro Tip: Your tails may be covered in ice or frost. Don’t worry your tails are NOT freezer burned. The light glazing helps protect and preserve the tails. Once thawed, be sure to give your tails a good rinse before cooking.

What’s the Stuff inside the Lobster Tail?

It is always important to make sure that the lobster tail has been properly cleaned, regardless of the method of cooking. Remove the long, thin vein that runs down the center of the tail (typically done with a paring knife). This is the lobster’s digestive tract. Although it won’t hurt if eaten, it does not taste good.

Another common finding within your lobster tail can be roe (or eggs) near the top of the tail. Make sure to clean thoroughly. Get to know more about the parts of a lobster.

Pro Tip: Is your tail red or pinkish in color? There is no difference in the taste or quality of the meat. It is simply a tail from a female lobster.

What’s the Best Way to Prepare Lobster Tails Before Cooking

Fully defrosted lobster tails can be cooked whole in the shell. The shell adds flavor to the tail meat while protecting the meat from high heat cooking methods like boiling, steaming, and grilling. Depending on how you plan to cook your lobster, you can prepare the tails with these methods:

How to Piggyback a Lobster Tail

By prepping the lobster tail using this technique, the meat will rest on the top of the shell. 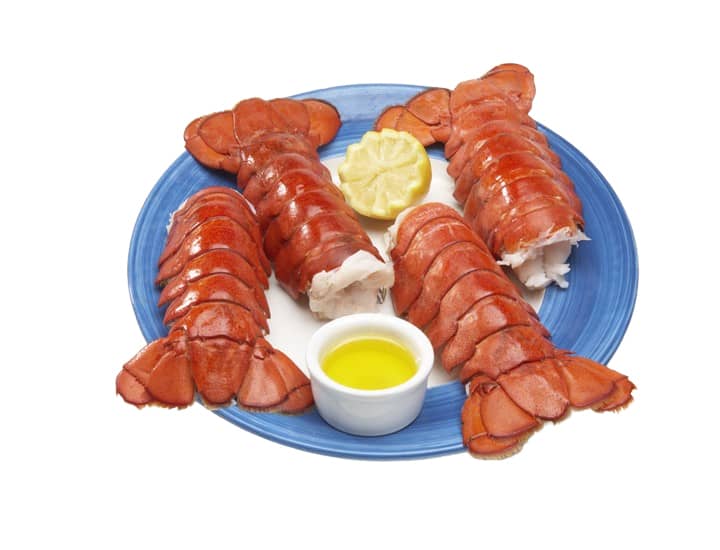 Real Maine Lobster Tails
I’m a life-long New Englander recently transplanted from Massachusetts to Maine, and I know a good lobster when I see one. I recently sent your jumbo lobster tail to a friend in Sedona, Arizona in thanks for helping my daughter out there. It was delivered promptly and safely overnight. My daughter said the lobster tails were huge!!! They had it for dinner last night. My daughter said it was absolutely delicious – and her friend who had never had a “real” (i.e. Maine) lobster, was equally as impressed.

Your product is excellent, and I’d order from your company again without reservation. Your product is honestly represented by your website. Like I said to the recipient of my gift, “there’s no better lobsta than a Maine lobsta”
Linda Peterson Acton, Maine
Buy Lobster Tails

How to Butterfly a Lobster Tail

This method is great for the hotter cooking methods as it allows the tail meat to absorb the complementary smoky tastes from grilling, roasting, broiling, or even baking. Butterfly lobster tails also make it easy to marinade in advance, and baste while cooking.

How to Fan-Cut a Lobster Tail

In this method the tail is cut off under-shell rather than the harder top, leaving the tail fan in place.

How to Split a Lobster Tail

In this method, the lobster tail is split completely in half, lengthways down the middle. The tail and meat will separate in two units, each facing up, each resting in its own split shell.

How to Remove the Lobster Tail Meat, Whole

Removing the tail meat raw in one whole piece is a delicious way to prep for butter poaching or gentle steaming.

It can be intimidating to cook Lobster tails on your own but they are really easy to make. Here’s our tips on the various ways you can cook your lobster and how long you should cook for.

How to Boil Lobster Tails

One of the easiest ways to cook lobster tails is to boil them.

For a simple boil cook, place them in boiling water – ensuring that the whole tail is covered – and then wait until the meat is bright white and shells turn red. If the tail is big, it is recommended to boil them to get a more even cook. Other applications also include par-boil or blanch tails (boil for about 2 minutes) and finish cooking on the grill or in the oven.

How Long to Boil Lobster Tails:

How to Steam Lobster Tails

How Long to Steam Lobster Tails:

How to Grill Lobster Tails

It’s OK to char the shell side of the lobster tail, but be extra careful not to char the flesh side. The tail is done when the translucent raw meat turns opaque and the shell turns red.

Lobster Tail Marinades and Butters: Looking for ideas for what kind of marinate or butter sauce to use with lobster tails? See our tips for lobster tail sauces.

How Long to Grill Lobster Tails:

Want to learn how to barbecue a whole lobster? See our recipe for cooking live lobster on the grill.

How to Broil Lobster Tails

Be careful when broiling lobster tails. This cooking method is a little trickier than other methods since the high heat of the broiler can dry out your tails in no time. Another option is to bake tails (see below) and finish them in the broiler for just a couple minutes to get a golden brown finish.

How to Bake Lobster Tails

How Long to Bake Lobster Tails In the Oven:

How to Poach Lobster Tails

How to Prevent the Meat from Sticking to the Shell

It can be very frustrating when you paid good money for lobster tails and after you cooked them the meat comes out of the shell in bits and shredded pieces. Typically this occurs when grilling lobster tails. Here are some tips for how to prevent the meat from sticking to the shell:

How Can You Tell Lobster Tails are Cooked?

There is only one way to ruin a good lobster tail and that’s by overcooking it! You can tell if your tails are done if the color of the meat turns from translucent to white or opaque color. Always remember to go by temperature and never by cooking time alone.

Here are some tips to tell if your lobster tails are done.

To stop the cooking process place tails in a bath of ice water. Cooked lobster meat should be pure white, opaque and elastic. See if you can pull the tail meat out of the shell in one large piece!

Comparing cooking techniques and times is important for finding the right method for you, so here’s a quick table breaking down the differences in how long it takes to cook lobster tails.

The Best Cooked Lobster Tails Start with the Best Lobster

Are you hungry yet?

Check out our deals on our fresh lobster tails and other seafood delicacies that can be shipped right to your doorstep, without losing flavor or freshness because we…

Get your lobster here.