One of the most popular dishes today is the clam chowder that has inspired festivals, novels and

poetry across the nation and in many other areas around the world. Seafood chowder history goes back to the 18th century with the earliest references of the dish found in Brittany, France and the Cornwall region of England, which are two areas on both sides of the English Channel. It’s believed the fishermen in both regions have everything to do with the popularity and spread of the chowder at the time. “Chowder” is believed to be a corrupted form of the French term “Chaudière” which refers to the cooking pot or cauldron.  At the beginning, early chowders were not made with clams only but all kinds of seafood available. In case of limited or zero seafood, chowders were even made using plain vegetables. Biscuits and salt pork were two ingredients that made it into the popular delicacy its known today; a very fulfilling and heartier meal (LifeScript).

It’s also believed French soldiers who had been shipwrecked around the Maine coast were short of supplies and used all they had salvaged from the ship to survive. In a boiling Chaudière (cooking pot) they added clams they had gathered and cooked them with pork, crackers and potatoes. The result was one of the tastiest dishes and an earlier version of “chowder” in the new world, a corruption of the world Chaudière.

The Pilgrims are also believed to have brought the Chowder tradition with them to America. Since it’s one of the easiest dishes to prepare and uses readily available ingredients, the new settlers might have known about the dish. At the time of the Pilgrims, records on recipes did not exist but documented records indicate by 1750s chowder recipes existed, with the first ever chowder recipe published in the Boston Evening Post by 1751. It was a layered dish made using fish, salt pork, onions, hardtack, spices, pepper, water, red wine and herbs (Whats Cooking America).

As North America opened up, chowder also expanded and recipes started reflecting regional differences, personal tastes and variations. Clams usage in chowders gained in the second half of the 19th century. This was the time when hardtack went out of favor, replaced with potatoes as bacon was phased out by salt pork. As early as 1800, there are a number of clear regional chowders in existence, including the Manhattan and famous New England chowder varieties (Persy Place).

Moby Dick, an 1851 book by Herman Melville who lived between 1819 and 1891 describes clam and cod chowders served in the Try Pots Nantucket chowder houses in Massachusetts (Persy Place).

Clam chowders are regionally different and can contain broth and clams. Together with the clams, onions and diced potatoes are commonly sautéed with bacon or salt pork drippings with frequent usage of celery. Some vegetables such as carrot strips are added mostly for color, parsley garnish or bay leaves for flavoring and garnishing. The clam chowder primary styles and variants include the New England clam chowder, Rhode Island clam chowder, Long Island clam chowder and the Manhattan clam chowder, among others (Fine Cooking).

This is the most popular of all clam chowders and it’s a hearty and creamy delight. As early as 1800s, chowders made using cream or milk had already started appearing before it was claimed in New England as theirs by 1900s. In recent times, chefs use butter roux and flour to make the soup thick. For those cooking the dish with milk, the roux is vital to ensure no cuddling takes place when boiled. The New England clam chowder is thicker than others and mostly made using clams, onions and potatoes with the use of tomatoes frowned upon. Oyster crackers are usually an accompaniment of the New England unique clam chowder. Those using crackers usually crush them before mixing with the soup to thicken the broth or to garnish the delicacy. 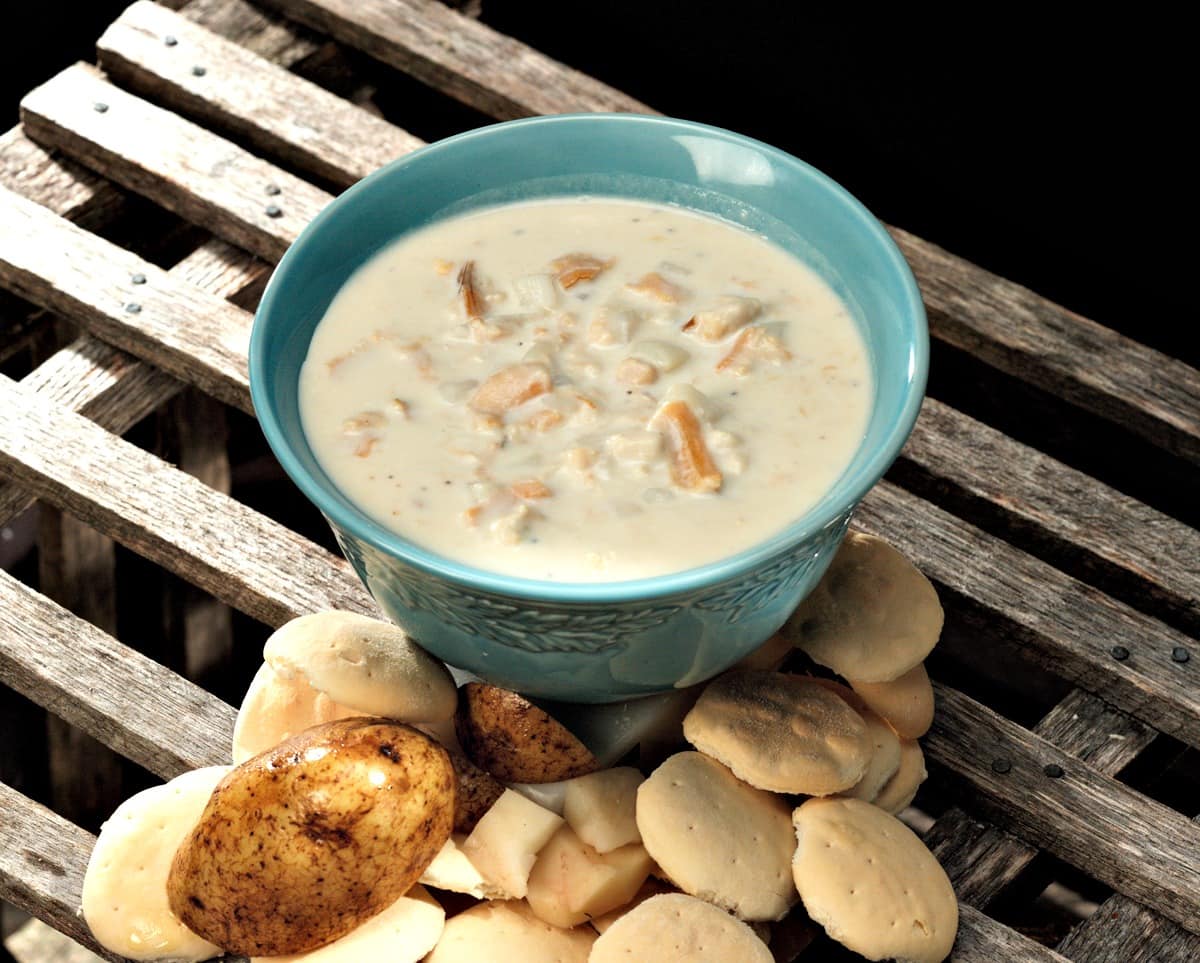 Best Boston Chowder!
We first had your fabulous clam chowda when we visited Boston 9 years ago. After sampling chowders throughout Boston for lunches and dinners during the week we were there, yours was decidedly the best. So long to our old family recipe, yours was decidedly better than ours. We’ve been ordering for Christmas dinner since and your eagerly awaited fabulous chowda arrives on time, in perfect condition, and is greatly appreciated.
M. Zeigler Clio, CA
Order New Engand Clam Chowder

One of the differences with the New England clam chowder is that the Manhattan clam chowder has tomatoes as one of the ingredients. This was hugely influenced by the clam soups and fish with tomato recipes of the fishing communities of the Mediterranean. In 1894, New York, a Delmonico Steakhouse chef published a clam chowder recipe in a cookbook that was largely tomato based believed to have grounded the recipe in Manhattan.  Since most purists and believers of the New England chowder were not happy with the tomato-based version, Maine introduced a 1939 legislation prohibiting tomato usage in clam chowders.

The traditional Manhattan clam chowder is characteristically a red broth with tomato for color and flavor. The use of tomatoes rather than milk is believed to have been influenced by Portuguese immigrants who had arrived in Rhode Island; stews made of tomatoes were by far a traditional Portuguese cuisine (Fine Cooking).

Believed to be one of the earliest forms of the clam chowder, the Rhode Island version is not as common as the rest. It lacks tomatoes or dairy products used to hide the sea flavor freshness. The Rhode Island clam chowder continues to be served in hotels and restaurants long established in New England in areas where white chowders are liked by tourists while natives love the clear chowder. As a traditional clam chowder characteristically clear, it contains bacon, onions, potatoes, broth and quahogs. In other versions of this chowder, a red one is usually served and contains a broth base made with potatoes and tomatoes. However, it differs from the Manhattan’s red clam chowder by the fact that it lacks tomato chunks or vegetables.

This is served across the outer banks areas of North Carolina and a clam chowder variation with a clear broth, onions, potatoes, bacon and thickened with flour. Black or white pepper is used to season it; includes infrequent use of hot pepper sauces or chopped green onions.

The Delaware variety is typically made of salt pork cubes pre-fried, including pepper, salt water, salt, potatoes, quahogs and diced onions. Delaware clam chowders were very common in the early 20th century up to around the middle of that century. It shares some common traits with the New England variation.

Considered to be a blend of the better of two worlds, something that most New Englanders are not concerned with.  The clam chowder served in Long Island is a combination of the traditional cream based clam chowder served in New England and the tomato-based chowder of Manhattan. As a result, the Long Island version is a cream tomato blend referred as such since, just like the Island, it is right at the Middle of Manhattan and New England (Persy Place).

In most clam chowder basic recipes, rendering of salted pork or bacon is required including celery and sweating onions, fat rendered with some flour mixed with chopped potatoes and milk as well as clam juice, usually bottled. Bay leaf is simmered with the mixture until the broth has thickened and potatoes cooked. Some cream is added to complete the delicacy (Serious Eats).

Pork options vary from sliced bacon that is largely available and used in chowders. Slab bacon can also be used and a better option than its sliced counterpart, especially for those who love meaty chunks in their broth.  Salt pork is cured and salted with the meat and fat un-smoked. In any of the types of pork used, it is important to ensure they are slowly and lowly cooked to render out the fat fully without burning the pork completely.  Nonetheless, you can also make your chowder without pork (Serious Eats).

For aromatics, the traditional flavorings include bay leaf, celery and onions.  While they might be distracting, other aromatics and vegetables can be used such as garlic, leeks, thyme and carrots.

The clams are mostly slow-growing types of bivalves and of diverse sizes as per their age during harvesting. Live clams that can be used in chowder include top-necks, littlenecks, count-necks, cherrystones and quahogs. Most chowders use quahogs as the main recipe; they are quite meaty while the smaller cherrystones and littlenecks are left for use in baking and raw bars (Serious Eats).

Oyster crackers are also an important detail in clam chowders. Otherwise, it will not be real chowder. As a staple dish across the United States, the recipes of the clam chowder have been tweaked and changed since the days of the Pilgrims to accommodate changing tastes and new ingredients. The basics still remain but new additions have made the clam chowder to have different results most of the time. Order Mail Order Chowder