Shrimp cocktail is everyone’s favorite party starter and is traditionally served as a Thanksgiving and Christmas appetizer. This classic seafood hors d’oeuvre can be found on the menu of upscale steakhouses and fine dining establishments. But what makes a great shrimp cocktail? It all starts with quality shrimp, cooked fresh! Our classic shrimp cocktail recipe will show you how easy it is to prepare at home in just a few minutes.

It has long been said that prawn/shrimp cocktail was invented by British cook Fanny Cradock sometime around 1960s. This is entirely possible as she wasn’t very good with food, and the mixture that makes up a shrimp cocktail is odd enough for her to have done it. Out of one hundred weird mixtures she invented, maybe one did really did not make you ill, and that became shrimp cocktail as we know it today. 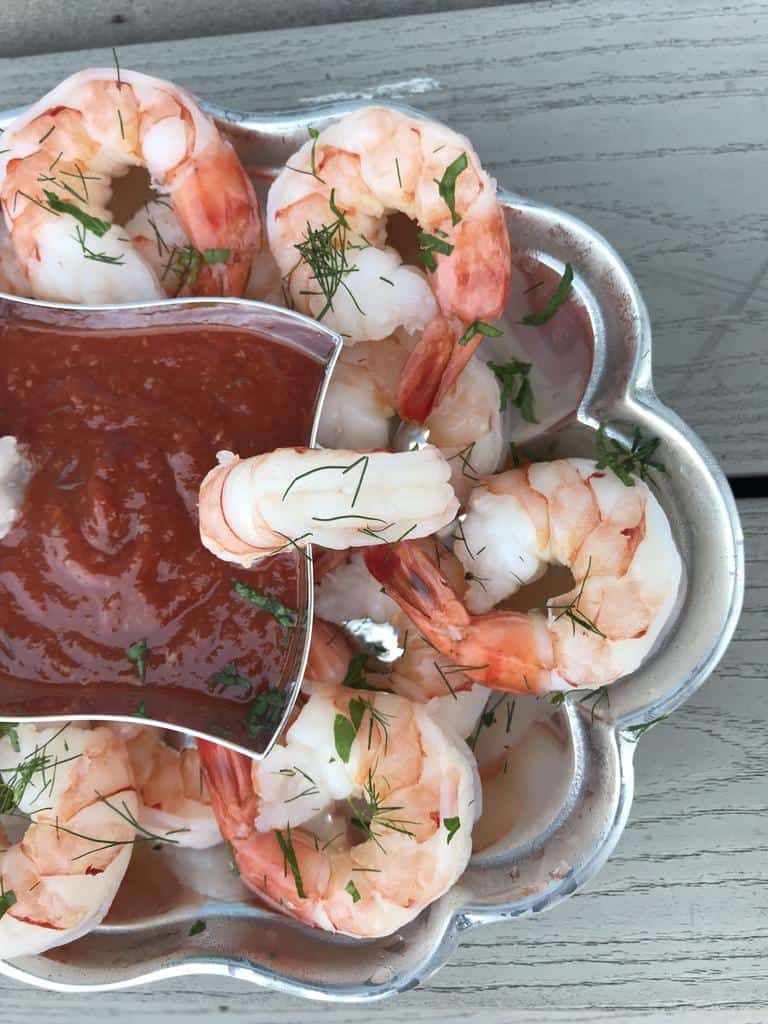 Simply the Best Shrimp!
These shrimp were just unbelievable. We followed the directions right on the package and they turned out perfectly. I can’t wait to order again!
Coral Springs, FL 33071
Buy Colossal Shrimp

Another version takes us to the United States. Apparently in the 19th century, a gold miner went into a bar in San Francisco with his gold nuggets. He had had a good day and wanted to celebrate, so he ordered a glass of whisky and a plate of oysters.

A few whiskies later and the miner looked at the plate of oysters, tipped them into his whisky glass, threw in a little Tabasco, ketchup and a couple of other condiments, and ‘drank them’.

Shocked, the bar owner asked, in an ironic tone, “What do you call that mess?”

The miner with the self-confidence that comes of having gold nuggets in your pocket, replied haughtily, “I call it an oyster cocktail”.

Impressed with this nonchalant display towards the expensive oysters, the owner stuck a sign in his window the following day offering Oyster Cocktails, and he charged ‘by the glass’. Soon other bars copied him.

Over time this seafood was replaced with a more economical type and the sauce refined. The choice of a glass, rather than a bowl, for this dish also comes from America, legend has it again.

During prohibition in 1920s, there was no wine, so no use for wine glasses. Rather than let them sit there unused, these became the vessel of choice for serving, what by then was, shrimp cocktail.

How much of this is true, is a mystery, but it is a fun story, and no proof exists that shrimp cocktail didn’t come about this way. In fact there is no concrete evidence of how it came into being.

For more pro tips see our guide for how to buy the best shrimp.

All successful recipes start with a game plan. Armed with your beautiful shrimp and this easy guide, you will never find yourself reaching for that plastic ring of shrimp again.

For this recipe we are using a modified court bouillon. Court bouillon is commonly used to quickly poach seafood. Filled with fresh aromatics and basic seasonings like salt and pepper it accents the natural flavors without overpowering.

Here is what you will need:

How to Make Shrimp Cocktail

Making shrimp cocktail is a cinch. The key is to use quality, large shrimp and never overcook. Shrimp are categorized by the number per pound. The best sizes for shrimp cocktail are big, colossal shrimp (16-20 per pound) and larger. Learn more about how to choose the right size shrimp.

Why Leave the Tail on Shrimp Cocktail?

First the tail on the shrimp makes a nice presentation. Second, the tail makes a nice handle for picking up and enjoying your shrimp.

To keep the tail intact, do not peel the small layer of shell just covering the tail.

Tip: If you push the shell just above the tail, you’ll push out the last shrimp morsel.

Why boil the shrimp for shrimp cocktail

Boiling the shrimp allows the pure flavor to remain while creating that crispy, snappy texture that pairs so well with chilled shrimp.

How long do I boil the shrimp for shrimp cocktail?

The shrimp cook fast. It should only take 3-5 minutes. The tails will turn red first and then the bodies will turn pink and opaque. They should feel firm to the touch but with a little spring.

What do I serve shrimp cocktail with?

Cocktail sauce and lemon wedges are the most common accompaniments to shrimp cocktail. Marie Rose sauce is also popular in some parts of the world. This is similar to cocktail sauce but with the addition of mayonnaise giving it a pinkish hue.

What size shrimp are best for shrimp cocktail?

We recommend using 16-20 count or larger shrimp for shrimp cocktail.

How many shrimps do I need per person for shrimp cocktail?