Shrimp might seem like a fairly straightforward seafood choice to make. Once you choose between fresh, frozen, tail-on, or peeled and deveined, they’re all pretty similar, right? They’re pink, C-shaped, lean, and delicious dunked into cocktail sauce. In fact, there’s a wide and delicious variety of shrimp from around the world that can make all the difference when choosing what to serve at dinner.

Knowing a bit more about your shrimp options can make the difference between a rubbery, bland shrimp cocktail and a melt-in-your-mouth buttery and succulent appetizer.

When you consider that there are over 300 species of shrimp in the world,  things can go from straightforward to overwhelming and confusing pretty quickly.

Let’s cut through the confusion and industry jargon and understand the differences between the most common varieties of shrimp from around the world. This article covers everything you need to know, including:

In the end, you’ll be an informed consumer who knows exactly how to shop for shrimp (and where to buy it from). Plus, you’ll know the right questions to ask about where your seafood is from so you’ll never have an unsatisfactory or overly complicated shrimp-buying experience again.

The 11 Most Common Types of Shrimp You’ll Encounter

From the meaty freshwater prawns native to Malaysia to teeny-tiny baby saltwater shrimp from Taiwan, the tastiest morsel of the ocean awaits you. Shopping for shrimp can be tricky when you don’t know what to look for. Thankfully we got you covered with the basics of the most popular species of shrimp.

Let’s dive into the different types of shrimp you’re most likely to find.

Rock shrimp get their name from their hard, calcified shell. These shrimp are on the smaller side, maxing out at 3 inches long. If you purchase them with the hard skin on, they’re great for grilling as they’re well protected. Use kitchen shears to remove the shells after cooking.

Pink shrimp, also called Gulf Pink Shrimp, is a large, meaty shrimp species harvested year-round. The largest pink shrimp population is found off the coast of southern Florida, where they are harvested by trawling. These large, plump shrimp can be boiled, grilled, pan-fried, or steamed to bring out their natural sweetness.

This species of saltwater shrimp gets its name from the striped red and black color pattern that appears after cooking. Shrimp that are cooked in the shell take on a redder color, while peeled shrimp turn orange during cooking. These shrimp are primarily harvested by farming. Some are harvested in the wild trawling the ocean floor, which can damage the ecosystem and catch unintended other species in the process. Always check where your fish came from and if they are Fair Trade Certified. 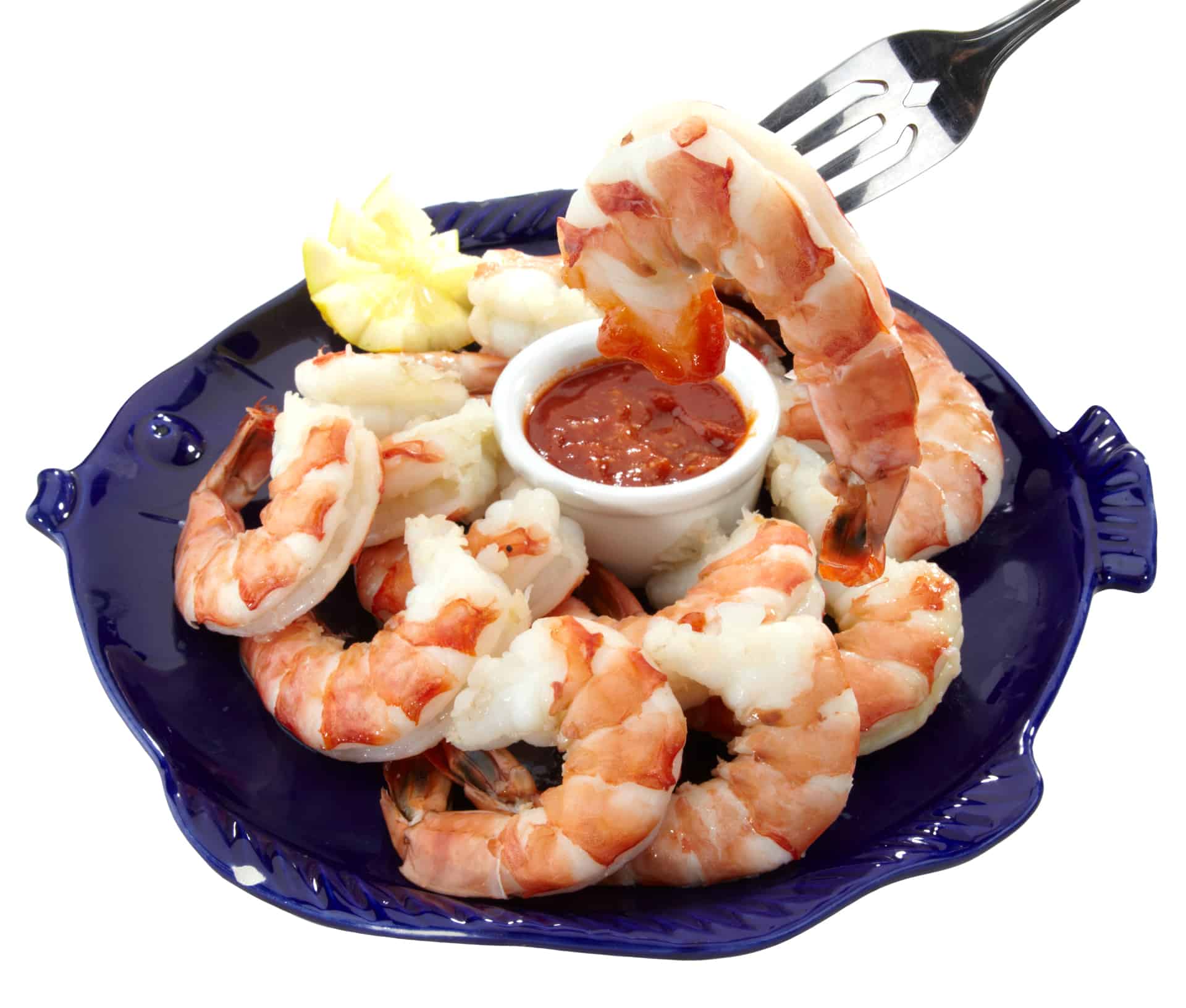 These medium-sized shrimp from China are harvested from cold water. As a result, their texture and flavor are delicate and even somewhat watery before cooking. A classic method of preparing Chinese White Shrimp is a quick stir-fry with Asian greens and plenty of spice. These tender shrimp cook in about two minutes in a hot wok.

These brown-shelled shrimp have a bolder flavor than most shrimp varieties. They’re popular in hearty, flavor-packed dishes from the Gulf of Mexico, like New Orleans jambalaya. According to the National Oceanic and Atmospheric Administration (NOAA), brown shrimp populations are at healthy levels and this species is responsibly harvested to maintain these numbers.

Also Read: 30 of the Best Desserts that Go with Lobster and Fresh Seafood

Translucent, medium-to-large white shrimp are an all-around great type of shrimp for cooking and eating. They easily absorb flavors from sauces and seasonings and hold up well on the grill, as well as indoors for stir-frying, poaching, and roasting.

Hailing from the chilly waters of the North Atlantic, this variety of saltwater shrimp are small, sweet, and light-colored. Their smaller size and mild taste make them perfect for steaming, poaching, or pan-frying. They cook quickly and make a great addition to salads.

Also called spot prawns, this shrimp variety hails from the west coast of the States and carries a sunny California disposition and famously sweet flavor. These easy-to-cook crowd-pleasing shrimp can be quickly sauteed, steamed, deep-fried grilled, or broiled in the oven. You can find them with their skin on or peeled and deveined for easy prep.

This species is also known as the Coonstripe shrimp or Pink Striped Shrimp. It has a unique body shape with a rounded head and a more curved body than most shrimp types. These naturally sweet, medium-sized shrimp are popular for poaching and enjoy chilled in salads.

This Asian species of freshwater shrimp is especially popular in Australia. It has a thick body and meaty texture that makes it good for grilling or turning into shrimp burgers or a dumpling filling. This species is harvested year-round and is certified by the Monterey Bay Aquarium Seafood Watch.

This saltwater shrimp species has a bluish-grey shell. They’re popular in Hawaiian and Mexican cooking and are often paired with fruity sauces and salsas. Their slightly salty flavor benefits from the balance of fresh fruit.

Where to Buy the Best Shrimp Species

For peace of mind and the best quality shrimp, you need to go directly to the source.

The best way to ensure your shrimp is from a trusted source with high sustainability markers is to have the seafood sent directly to you.

How to Find Sustainable Shrimp vs Overfished Shrimp

When it comes to shrimp, like most seafood, sustainability should always be a consideration. With declining ocean stocks and entire ecosystems at risk, the seafood industry must pay attention to its environmental impacts. By researching and buying sustainable shrimp, seafood lovers are helping to balance the dwindling ecosystems and prolong the species.

The fastest way to evaluate sustainability is to look for shrimp that’s marked by the Monterey Bay Aquarium Seafood Watch seal of approval—like these.

But what makes it sustainable? Sustainability is when shrimp (really all seafood) is caught or farmed in ways that consider the long-term impacts on the survival of the species and the well-being of the oceans—you can see our sustainability commitment (and the receipts) here.

The two methods of harvesting shrimp are man-made farms and by catching them in their natural habitats. Both harvesting methods have benefits, but there are a few things you should look for before buying sustainable shrimp.

Depending on where shrimp are farmed, this method of raising seafood can be harmful to the environment.

In some farms, animals are forced into such close quarters that disease and pollution run rampant. When farming systems are not “closed”, for example, they can release waste into open water. In turn, this can hurt other areas of marine life and over time, cause lasting damage to entire ecosystems.

Because of these dangers, shrimp farming in the US is subject to strict laws. Farmers must use closed ecosystems and minimize overcrowding.

However, the government does not closely regulate feed in these farms, and most farm-raised shrimp are fed a diet far different from what they’d eat in the wild. Soy and other GMO-containing products are common because they’re cheap and help fatten up the shrimp quickly for selling.

That being said, if you are going to eat farmed shrimp, it’s always better to choose seafood grown in the US. Shrimp farms overseas are not subject to the same environmental regulation.

Certain wild-caught shrimp come with their own set of sustainability issues. The most common method of catching shrimp in the open ocean is through trawling. This means that fishermen sink a heavy net to the bottom of the ocean and drag it along, gathering a lot more than shrimp on their way.

By some estimates, ocean trawling for seafood can accumulate up to five pounds of bycatch (plants and other animals, primarily) for every pound of edible shrimp. When this bycatch is caught and discarded, it leaves gaps in an ecosystem and food chain that can cause serious harm.

To curb this, many American fishermen use bycatch reduction devices or BRDs. There are a few US-based shrimp sources that practice sustainable fishing.

One way to be sure that the fish you choose is caught in an environmentally-conscious way is to look for Fair Trade Certification. This indicates that the shrimp have been harvested by following a specific set of rules.

In addition to protecting natural shrimp populations and the larger ecosystem, the Fair Trade Certification sets a high bar for human rights and economic standards. In other words, the men and women who harvest the shrimp are paid fairly for their work and have comfortable working conditions.

Next time, don’t reach for the cheapest or closest option at the grocery store. Order online with us to get Fresh Shrimp delivered right to your door!

You can try it today with direct delivery of sustainably-raised colossal or wild-caught shrimp.