Choose from TUE to SAT*

To get it delivered tomorrow

For each of this product

Our North Atlantic, flash-frozen, Lobster Tails are simply the best in the world. Don’t settle for those cheap warm-water tails you find at the big club stores.

For dessert cool off with a tart and tangy key lime pie made with real Key West lime juice and an authentic graham cracker crust. Yum!

Choose surf and turf dinner for 2 or 4.

Free Overnight Delivery. This special three course surf and turf ships fresh-frozen so order now and stick in your freezer.

Delivery on time with all I ordered. But being a novice and even using their chat box, I didn't know whether to boil and grill tails before or after taking them out of the shell. Just wasn't clear. A video would have helped. More work than I expected. Filets were very very tender, but no flavor(I had heard they weren't supposed to have much, but didn't think they were this flavorless). I know restaurant lobster/steak dinners are pricey, but just as much as 2 lobster dinners and 2 8-10 oz tails with LobsterAnywhere.com Will let someone else cook our lobsters next time. (But they are better than the other lobster providers from Maine!)

My son and his fiancé were very impressed by my gift of Captain’s Tails and Turf from Lobster Anywhere. They also were very pleased that when they had a question your Customer Service contacted them immediately.. I plan to be a return customer.

I sent this out to my native New Englander Grandfather in the high desert of Oregon. Everything arrived frozen and perfect. He misses his New England seafood and the fine folks here at Lobsteranywhere.com help me share a little bit of home with him. They brought a smile to his face for sure!

We had a lovely dinner consisting of 2lobster tails, 2 fillet mignon and key lime pie. Everything was perfect. 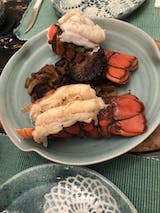 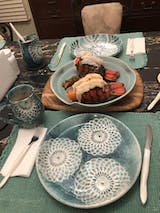