There are two main lobster varieties harvested and sold in the US—Rock vs Maine lobster—but it can be difficult for first timers to know which type is the hands-down best choice for home cooks. Don’t worry, cause we’re here to answer all your questions.

We’re covering everything you need to know about these two prominent lobster breeds and which one we New England-born lobstermen think is the best.

This article covers it all, including…

By the end, there won’t be any confusion about which variety of lobster is the all-around best—and which you should definitely look for when shopping.

Rock Lobster vs Maine Lobster: Key Differences and Why They Matter

Despite the different nicknames, the basic characteristics of each of these shellfish varieties are the same—but when cooked, there are massive differences.

You might be thinking, “lobster is lobster, it tastes great no matter what!”

And you’d be both right and wrong. Yes, lobster is a delicious, meaty seafood variety that can be enjoyed in dozens of tasty ways, from hot buttered rolls to creamy mac and cheese and much more. However, there are some major differences between rock lobsters and Maine lobsters that can make or break a dish.

For starters, if you love the succulent lobster claw, your only option is the Atlantic lobster from the north. That’s right––spiny lobsters don’t have claws!

In addition, Maine lobsters are the largest around, and under their smooth dark red shell is some of the best tasting seafood you can find. With a flavor profile that goes unmatched, it is no wonder why many prefer it over other species of lobster.

That doesn’t mean the Spiny lobster is bad. In fact, when prepared in certain ways, it’s really good. It is just not as good as Maine lobster. Spiny lobsters have very little meat and are smaller than Northern lobsters. Rock Lobsters also have a more muted flavor compared to the Atlantic Lobster and require more seasoning to get a good dish.

Here is the run-down of what home cooks need to know about Maine lobsters and where to find them. The technical species name for Maine lobster is Homarus americanus.

Where Maine Lobsters are Native

As you might guess, Maine lobsters are found in Maine. They’re also known as North American and Atlantic lobsters because they live throughout the icy cold waters of the northeast.

These tasty crustaceans are found as far north as Labrador in Canada and as far south as North Carolina. However, most are collected just north of New Jersey.

How to Tell its a Maine Lobster

If you’re shopping for lobsters, it’s easy to tell just by sight if you’re buying Maine or rock lobster. If the tank is full of dark reddish-brown shellfish with a smooth body and prominent claws, you’re looking at true lobsters (yet another name for Maine lobsters).

The largest of these animals can grow as big as 25 inches long and weigh up to 44 pounds, which means they’re the heaviest crustacean on earth. Most American lobsters are sold between 1 and 2 pounds and roughly 9 inches long.

Maine lobsters have 10 spindly legs (which have a small amount of meat in them), and a long, thick tail. In fact, Maine lobsters are also the longest decapod (10-legged animal) in the world.

Other Names for Maine Lobster

You may find Maine lobsters sold under these common nicknames:

The Flavor Profile of Maine Lobster

True lobsters are sought after for their unrivaled flavor. These shellfish are remarkably buttery and sweet and their texture is known for being tender yet meaty and satisfying.

The best part for home cooks is that fresh Maine lobster is flavorful enough to shine all on its own with minimal seasoning or prep work. Simply poach, steam, roast, or grill the lobster, add a drizzle of butter, and you have a meal that’s guaranteed to impress.

See this Lobster Cooking Guide for an in-depth tutorial.

You can use the succulent meat of a Maine lobster in a number of ways. The large tails are perfect for grilling. The light, buttery claw and tail meat is also delicious paired with steak or chicken for surf and turf at home.

And of course, lobster rolls are a classic New England dish that celebrates everything that is delicious about Canadian lobster. Whether you enjoy your lobster smothered in cold mayo Maine-style or hot and buttery Connecticut-style, you truly can’t go wrong with a toasted bun stuffed with succulent Maine lobster.

Where to Buy the Best Maine Lobster

All that food talk make you hungry?

Good news: you can have the highest-quality Maine Lobster delivered straight to your kitchen. Our offerings include tails of all sizes, whole live lobsters, and even restaurant-quality lobster rolls ready to serve. 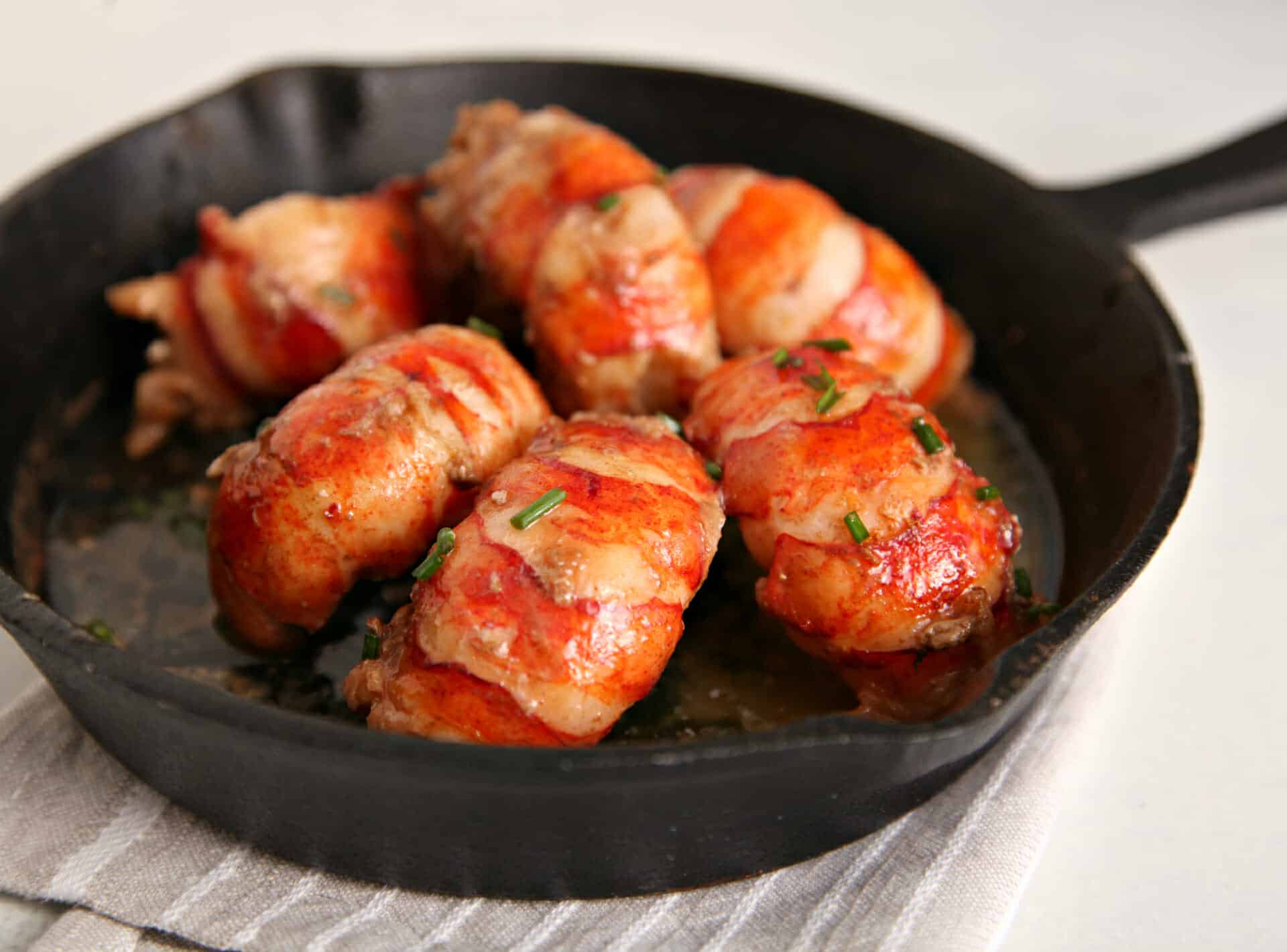 Here’s what you should know about the other lobster species found in the United States, rock lobsters.

Where Rock Lobsters are Native

Spiny lobsters are warm water creatures. They’re found around the world, including the Caribbean, Southeast Asia, and Australia.

In the United States, most rock lobster comes from Florida and southern California.

How to Tell It’s a Rock Lobster

First of all, the lack of claws is a good indication that you’re looking at a rock lobster, not a Maine lobster.

In addition, spiny lobsters earn their name because of the hard spikes running the length of their tail and bodies. As you might imagine, these spikes make holding and preparing the lobsters (live or dead) not so fun for home cooks.

Spiny lobsters also often have white or black spots on their shell and their tails are often ringed with darker colors.

Other Names for Rock Lobsters

You may see rock lobsters called:

The Flavor Profile of Rock Lobsters

Rock lobsters are noticeably less sweet than Maine lobsters. They have a similar meaty texture, but the more subtle flavor means that these shellfish are often cooked with bolder sauces and seasonings. If you want a luxurious lobster meal, these aren’t the lobsters you’re looking for. If you want lobster to be a small part of a larger dish, they’ll work well.

How to Cook Rock Lobster

For this crustacean, it’s all about the tail. Usually the spines make handling difficult and since rock lobsters don’t have claws, they are usually sold as frozen tails only.

You can cook rock lobster similarly to Atlantic lobster, such as by grilling or steaming. But in most cases, you’re going to want something more flavorful to really bring the seafood to life.

If you grill or steam spiny lobster meat, try adding an herb or spicy sauce such as compound butter or a spicy salsa to infuse the dish with more flavor.

In China, spiny lobsters are often stir-fried with a sweet and savory soy and ginger sauce to compensate for the more muted flavor of the meat.

Showdown: Why Maine Lobster is the Best Lobster

Expert lobstermen and chefs agree. When it comes to flavor, texture, versatility, and bang for your buck, the best choice every time is Maine lobster.

These true lobsters are the most sought-after crustaceans on the market for a reason:

The Easiest Way to Get Your Hands on Maine Lobster

Are you sold yet? Then let’s get you started with delicious, unbelievably fresh lobster shipped right to your door.

At Lobster Anywhere, we believe in selling our customers the finest North Atlantic lobsters we can find. All our lobsters are:

(Grocery stores wish they could compete with us on quality!)Buy fresh premium Maine lobster online and have it carefully shipped to your door ready to enjoy!