Lobster rolls are a special summer sandwich. Native to New England clam shacks and roadside stands, it’s the coastal brother of the popular hot dog. But who invented the lobster roll? The history of the lobster roll is a fascinating one.

Traditionally, the best lobster rolls have been found in the states of Maine, Massachusetts and Connecticut and in seaside hotspots like the Cape Cod peninsula. But did you know you can make this sandwich in the comfort of your home with a little know-how and a few simple ingredients?

How to make lobster rolls you ask? It’s easier than you think. Check out our Maine lobster roll kits containing classic split top rolls and pounds of sweet tail, knuckle and claw meat. Lobster rolls taste better when they are made at home.

It doesn’t matter if you’re an amateur cook or a professional chef, anyone can construct a good roll. See our tips for making both hot buttered and traditional lobster rolls at home. Read on to find out why America loves this succulent seafood sandwich — from fast food joints to swanky restaurants.

The History of the Lobster Roll

Lobster rolls are native to New England’s six states (Maine, Vermont, New Hampshire, Massachusetts, Rhode Island, and Connecticut). They can also be traced to the Canadian Maritimes (New Brunswick, Prince Edward Island, and Nova Scotia). Today, lobster rolls are served from the hatches of food trucks, in award-winning restaurants, and out of seafood shacks along the oceanfront. America may have claimed this crustacean sandwich, but the lobster roll is proudly East Coast.

Who Invented the Lobster Roll?

It’s a seriously succulent saga. The mighty lobster roll boasts a rich and colorful history with roots deep in New England and the Canadian Maritimes. It’s gone from small-town sandwich with humble beginnings to a North American icon in just a short span of time.

Before the roll went gourmet, lobster sandwiches were made by the very people who did the fishing—the lobstermen. It was a simple, cheap sandwich made with two slices of white bread with cooked lobster meat from less-than-perfect lobsters or from the days unsold catch.

Where are Lobster Rolls From?

While there are plenty of rumors about its original birth place, the lobster roll can be traced back to the Roaring Twenties to a restaurant called Perry’s in Milford, Connecticut. The story goes that Harry, the proprietor, invented the portable sandwich after a travelling liquor salesman swung by his eatery. The salesman was hankering after a “hot grilled lobster sandwich” to take with him on the road. Harry, being quick-thinking and nimble-fingered, created one on the spot.

Harry began perfecting his sandwich and noted that sliced white bread was a bit of a letdown. It was flimsy, soggy and kind of tasteless…and it didn’t hold the lobster well. He enlisted French’s Bakery in nearby Bridgeport,CT to make a special bun just for Perry’s. But unlike our top-split bun of today this was more of a submarine sandwich roll. Harry cut a v-notch wedge in the top for loading up the meat. The bread top was put back on and the sandwich was grilled and ready for takeout!

America is on a Roll with Lobster Rolls

The Perry’s trend caught fire and folks were soon enjoying this old-school grilled submarine sandwich up and down the Connecticut coast. In the 1950s, lobster shacks were springing up all along the eastern seaboard, delighting out-of-towners and local folk. But it wasn’t until the 1970s that the lobster roll made major in-roads in foodie culture. Red Eats, a famous food stand on Maine’s Route 1, helped boost the sandwiches popularity. 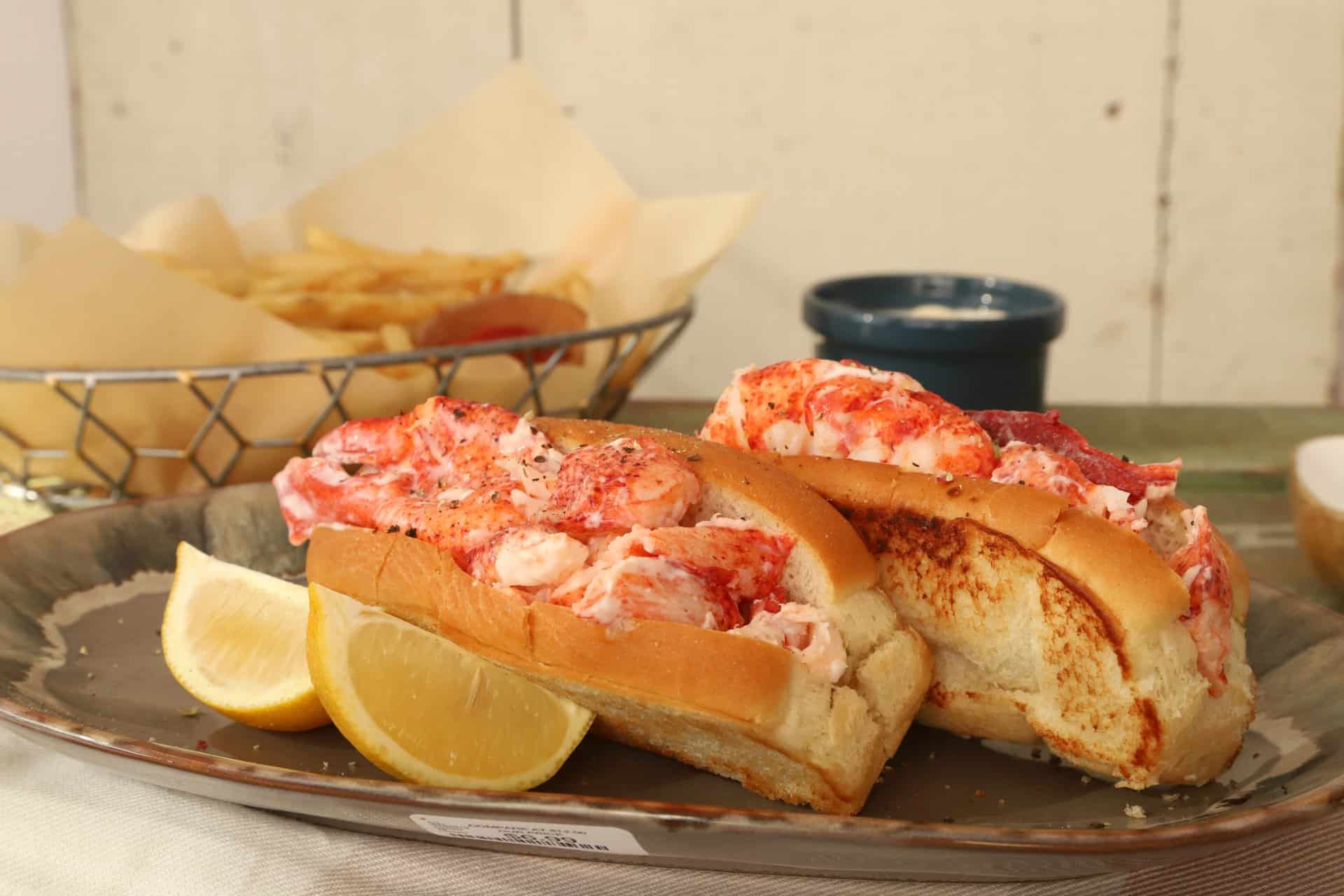 Best Lobster Rolls
For good reason I never eat lobster outside of Maine. I however lost a bet and owed a friend in Oregon some lobster. While it was not quite as good as sitting on the dock, it was damn close. I was very pleasantly surprised how good the lobster was after being frozen and thawed for some lobster rolls. Would definitely buy again
D. Smythe. Eugene Oregon
Buy a Lobster Roll Kit

Jasper White, a legendary Boston, Massachusetts chef, is credited with the lobster rolls’ rise in the 1980s. His dressed-up versions were enjoyed at his landmark waterfront restaurant Jasper’s and at his Summer Shack seafood eateries.

Ever since, the sandwich has solidified itself as a true American classic, up there with apple pie, buffalo wings, hamburgers, and corn dogs. It has single-handedly put New England on the culinary map, not just in the USA but also the world.

It’s full steam ahead for the lobster rolls craze. Seafood shacks are dropping anchor all across the country, some with waterfront views and others with views of the mall food court. Lobster roll trucks are rolling in cities like Cape May, Maine, Chicago, Illinois, Austin, Texas, and even Park City, Utah. As of this writing, there are five different lobster truck companies “clawing” it out in California alone.

Everyone is getting in on the action; including McDonald’s. Even Subway, the largest fast-food company by store count, is also shelling out crustacean sandwiches. The famed French restaurant, Balthazar, located in the swanky SoHo section of Manhattan makes rolls with their own in-house baked bread.